“I work with independent filmmakers who are about to start production and need guidance on what contracts they need to protect themselves and their ownership interests,” Victoria said. “I also work with creatives who are already in production and want me to look at the contracts that they’ve already entered or are about to enter. Clients will even have me review footage to identify chain of title issues they may have missed.

“I love reading contracts. I love the nuances of the language and finding creative ways to get what you want. That includes identifying when a deal is not in a client’s best interest. I want to be able to protect others from being taken advantage of.”

Victoria is a screenplay writer and co-producer of independent television and film projects. She is a professor at Full Sail University and teaches business, law, and production courses. She is also the faculty sponsor for the Pre-Law Society.

“The law is a passion of mine and I want to help people who are pursuing passion projects in entertainment, specifically,” Victoria said.

It’s rare to find an entertainment lawyer as fully immersed in the entertainment community as Victoria who was named Program Manager (Dean) for Full Sail University’s Entertainment Business Master’s and the Business Intelligence Master’s Degrees in September 2020.

Victoria has been a member of the Entertainment Arts and Sports Law Section of the Florida Bar since 2008. She has been working in the legal field since 2005 and began practicing law in 2008.

Her industry experience offers clients insights to the contracts, common pitfalls and creative protections they need and should be aware of.

“I’m a huge supporter of the arts,” Victoria said. “I think one of the biggest hurdles for creatives is knowing how to do things legally so they don’t get sued. I find that people tend to be afraid to ask for permission for things because they assume it will be too expensive or they will get ‘no’ for an answer. I want to help people safely make their art so that they can exploit it and so the world can benefit from it.”

Entertainment Arts and Sports Law Section of the Florida Bar 2008

Entertainment Attorney Victoria Hernández Wasinger was born in Denver, Colorado, lived in Puerto Rico where Spanish was her first language, then moved to Orlando in 1987.

“I come from a family of lawyers: my dad and my mom, aunt, and several cousins are in the legal field,” Victoria said. “My mom and my dad work together. My dad is an attorney, and my mom is his paralegal and office manager. I have spent my whole life listening to them talk about the law at the dinner table.”

Victoria attended the University of Miami, in Coral Gables, Florida and went to law school at Hofstra University on Long Island, in New York.

“When I saw how applicable contract law was to so many different things in everyday life, I decided I wanted to pursue a career in transactional law,” Victoria said.

Victoria began practicing as a litigator in State and Federal court, then received an opportunity to start teaching at Full Sail.

“I mainly work with independent creators who are just getting started in their careers,” Victoria said. “Some of them have worked on these things for their whole lives and are finally getting them off the ground.”

“There are a lot of people who talk about creating art but never actually go through with it because it’s hard and takes a lot of determination. The people I work with are the ones who are taking the steps to actually bring their ideas to life which, I think, is commendable. I like helping them.”

When I’m Not Working

I like hanging out with my family, watching movies, and writing scripts. I also love dogs.

The first movie that I ever wrote is a short film that I made with students and faculty at Full Sail a few years ago, called “Dogs Welcome.” It was inspired by my dog, and is about a new dog owner who moves to a town that isn’t pet friendly.

When I started getting into production myself, that really helped me with my clients. I understood the types of things that they were going to encounter on a completely different level than I did when I was just handling their contracts.

Now that I’ve actually been involved in pre-production and worked on set, I know the types of things that my clients are going to encounter. It helps me give them fair warning: ‘Here’s what you can expect. Here’s why you need this versus this. Here’s when you should worry about this. Right now you don’t need to concern yourself with that part.’

It gives me a lot more insight into the things that they’re going to face and allows me to give them better advice. 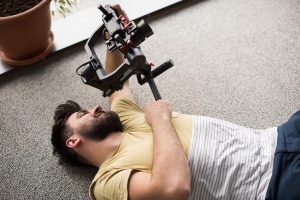 I work with clients in Florida and across the U.S. For example, I have clients in DC, Pennsylvania and in New York. For production contracts or production issues, however, I prefer working only with Florida-based clients.

One client I had who had a record that was sampled by a major artist in the ‘90s, had never been paid for it.

When she came to me, another big artist was going to sample her track again, but was actually going to pay her and do the right thing. She needed my help in knowing how much to charge.

I worked with her and talked her through it: “here are your rights. This is what you can ask for.”

I armed her with the knowledge she needed to negotiate for herself with confidence and she was so grateful.

She ended up negotiating a really great deal, even better than expected. After having had her art stolen in the past and not getting any credit, she was happy that this time she was actually given her due credit and compensated fairly.

My goal is to take the fear out of creating and distributing art. People hear all of these cautionary tales about others getting sued for copyright infringement or trademark infringement.

I find that there are a lot of creatives that are scared to make things and put things out there because they’re worried they’re going to get sued. It’s nice to talk to them and say, “Okay, here’s the real risk. Here’s what is allowed and here are the things you can’t do. And here’s what you should do to protect yourself.”

Never face a legal problem without an attorney

Wasinger Law will help you to protect your family, your business and your legacy.